Posted at 10:36h in Uncategorized by BINR

Civil War (1st one), Civil Rights movement (2nd one) and now Rev. Barber of Moral Mondays and NAACP President of North Carolina states in his book The Third Reconstruction:How a Moral Movement is Overcoming the Politics of Division and Fear.

Rev. Barber was born under a Virgo Evening Star. Sometimes known as a ‘Full Venus’, these souls have a heart centered pulse to their partners, communities and families. ?In Virgo, the Venus Star opens the soul to express their loving service to their ‘tribe’. ?With Mercury (rules Virgo) in social justice and equality-seeking Libra, Rev. Barber would be an illuminated channel of how to bring diverse groups together in a higher cause.

The current Aries Morning Star is being supported by the methodical and pragmatic Virgo Star of Rev. Barber. ?The humility and detachment aids the exuberance and sometimes aggressiveness of the Aries Morning Star we are all influenced by until January 9, 2018. His peace-making qualities will surely be needed. Through his Mars in Libra, he would more likely want to balance the scales of any social situation from micro-aggression between individuals to desiring to influence our thoughts and actions for a more equitable society. ?The Evening Star in Virgo adds to his ability to love the details of organizing disparate communities while balancing his ideals (overcoming division and fear) with practical realities. 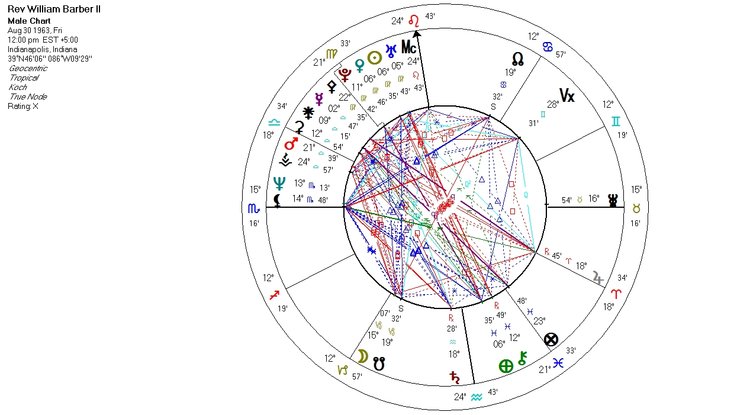